PepsiCo is Eintracht Frankfurt’s new premium partner from next season. The US food company and the Bundesliga club have agreed on a provisional contract term of five years.

The strategic partnership includes the exclusive right to supply and serve soft drinks, iced tea and snacks at all events at the Deutsche Bank Park in Frankfurt and will also be extended to the Brentanobad stadium, the ProfiCamp and the Riederwald stadium, as well as to all other Eintracht locations.

Deutsche Bank Park in Frankfurt has a new partner in the beverage sector. Image: Eintracht Frankfurt

This goes hand in hand with a joint appearance of the two companies in word and figurative marks and all associated products. The Pepsi Max brand will be at the center of all branding and advertising campaigns related to the traditional club. In addition, the range in Deutsche Bank Park is complemented by the beverage brands Pepsi, 7UP, Mirinda, Schwip Schwap and Lipton and in the snack area by Lay’s and Doritos.

PepsiCo has longstanding partnerships in the sports segment around the world. As a partner of the UEFA Champions League and UEFA women’s competitions, the world’s second largest food and beverage company underlines its affinity for football and its attitude towards diversity. PepsiCo will also act as a partner in the men’s and women’s divisions of Eintracht Frankfurt.

In addition to the premium partnership with Eintracht Frankfurt Fußball AG, PepsiCo will also become an Adler partner of Eintracht Frankfurt eV and thus an important supporter of youth, children and popular sports in Riederwald and the city branches. As a partner of Deutsche Bank Park, another focus is on the numerous entertainment events featuring top international stars and unique live events that characterize the successful summer of the Frankfurt stadium.

You can find an overview of the drink prices of the Bundesliga football teams here.

As part of the premium partnership, PepsiCo is supported by the Radeberger Group, which is solely responsible for manufacturing, distributing and selling the PepsiCo brand portfolio across Germany as part of a long-term cooperation. This also applies to the jointly planned conversion to a premix bar and the further development of the kiosk infrastructure in Deutsche Bank Park, which should ensure higher product quality and at the same time shorter waiting times in the future.

PepsiCo sets central guiding principles in the area of ​​sustainability

In the food sector, PepsiCo is seen as a pioneer in the important issue of sustainability, which will soon also be a criterion in the licensing process of the DFL German Football League and is currently being treated with top priority at Eintracht Frankfurt. In addition to promoting the economic advancement of women, the important principles of PepsiCo’s daily work include respect for human rights, the creation of inclusive jobs, climate change mitigation and regenerative agriculture and packaging solutions. To this end, PepsiCo has formulated ambitious goals up to 2030 in its “PepsiCo Positive” sustainability strategy, which are divided into the areas of “Positive Agriculture”, “Positive Value Chain” and “Positive Choices”. 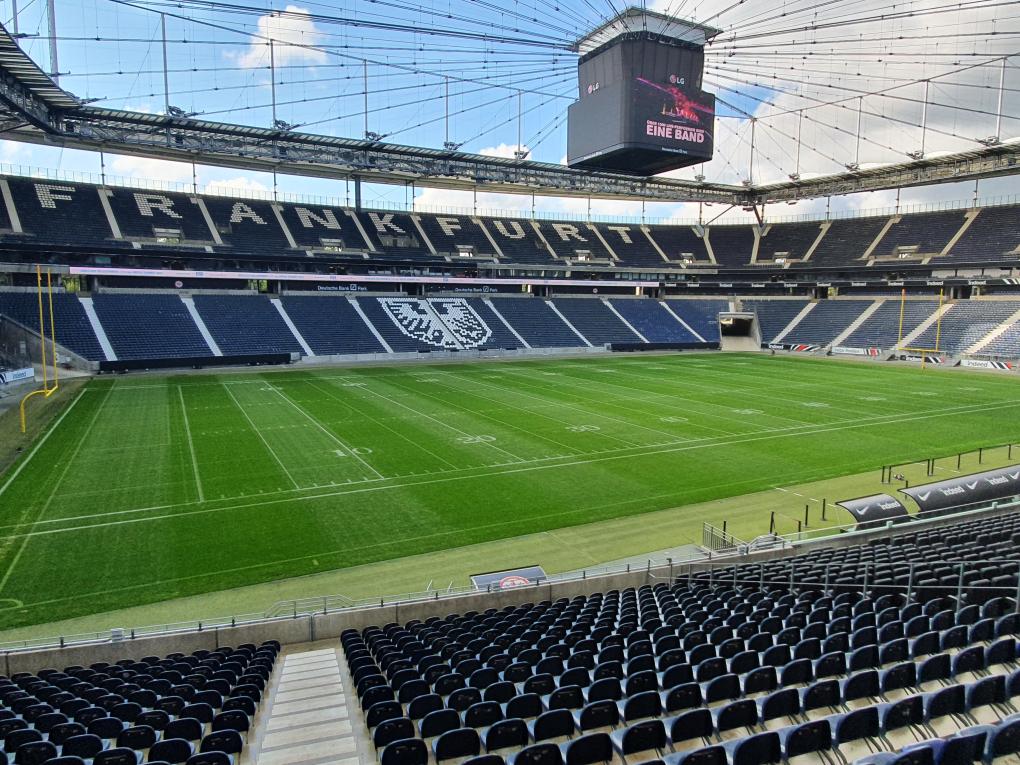 There is room for 51,500 fans in Frankfurt’s Deutsche Bank Park. Image: world stadium

Axel Hellmann, CEO of Eintracht Frankfurt Fußball AG, says: “PepsiCo is a perfect partner for Eintracht Frankfurt in many ways. As a top international brand based in Germany in the Rhine-Main region, there are important parallels with the internationally renowned Eintracht, which has always been present and has nurtured its regional roots. Both institutions are characterized by tradition and stability, as well as an attitude towards socio-political issues that has developed over the decades. PepsiCo also showed us a compelling concept when it came to sustainability. With the special variety in the product range, PepsiCo guarantees an interesting and expanded offer for our fans and visitors to the stadium. This partnership is a milestone for Eintracht Frankfurt and Deutsche Bank Park “.

Torben Nielsen, PepsiCo’s managing director for the DACH region based in Germany in Neu-Isenburg, looks forward to the next five years: “For us, this partnership is a milestone for our sports sponsorship in Germany! support Eintracht Frankfurt as a new partner from next season. Above all, the connection with the Frankfurt office is a personal matter that is close to my heart and makes this partnership something very special. ” (Stadionwelt, March 22, 2022)

Photos of the Deutsche Bank Park can be found here.