In a few months, the largest floating wind farm in the world will come into operation, 140 kilometers off the Norwegian coast. It replaces some fossil fuel generators on oil production platforms.

Hywind Scotland is the world’s first commercial floating wind farm and has been in operation since 2017.

It was a world first when Siemens, at the time without its current wind energy partner Gamesa in Spain, and Norwegian oil and gas group StatoilHydro put a floating wind farm into operation in 2009. It was anchored 12km away. south-east of the island of Karmøy in Norway at a water depth of 220 m. Hywind, as the facility was called, would become the ancestor of a variety of floating power generators. This should make offshore technology more flexible. The vast majority of places could not be used until then because the great depth of the water did not allow for conventional foundations on the sea floor.

The idea didn’t catch on as quickly as partners thought at the time. There are now 21 floating wind farms, most of them in Europe. However, the overall performance lags far behind that of conventionally established offshore installations and even more so than onshore installations. But locations in relatively shallow water are being built step by step, so new ones need to be developed further from the mainland. In particular, countries and regions with deep coastal waters are very interested in floating offshore systems. These mainly include the west coast of the United States, Japan, South Korea, China, France, Spain, Portugal, Norway, Scotland and Ireland.

Scotland has the largest number of floating generators

The currently largest floating wind farm with nearly 50 MW is “Kincardine” in the Scottish North Sea. Five 9.5 MW Vestas turbines and one modest 2 MW rotate 15km from the port city of Aberdeen. The latter went online in October 2018, as a kind of exercise to see if the concept of swimming worked.

Scotland is also home to the second largest floating wind farm. “Hywind Scotland”, the world’s first commercial power generator of its kind in operation since 2017, is comprised of five 6 MW Siemens generators. It is operated by Hywind (Scotland) Limited, a joint venture between the oil and gas group Equinor in Stavanger, Norway (75% stake) and Masdar Clean Energy (25%), whose main mission is to build the eco-city of Masdar in the United Arab Emirates. Hywind Scotland is estimated to run at full load 57% of the time in 2020, nearly double that of most onshore wind generators.

Water depth up to 300 meters

The records won’t last long. “Hywind Tampen” is expected to go online in the third quarter of this year. It consists of eleven 8 MW Siemens Gamesa generators. The water depth here, almost 140 km west of the Norwegian coast, is between 260 and 300 m. Contrary to all other wind farms in the world, the electricity generated will not flow to land, but will be used on the high seas. It supplies power to the Norwegian oil drilling and production platforms Snorre A and B and Gulfaks A, B and C. The wind generators are expected to cover 35% of demand and save 200,000 tons of carbon dioxide emissions per year. Until now, the electricity on the platforms has been produced exclusively with fossil fuel generators. 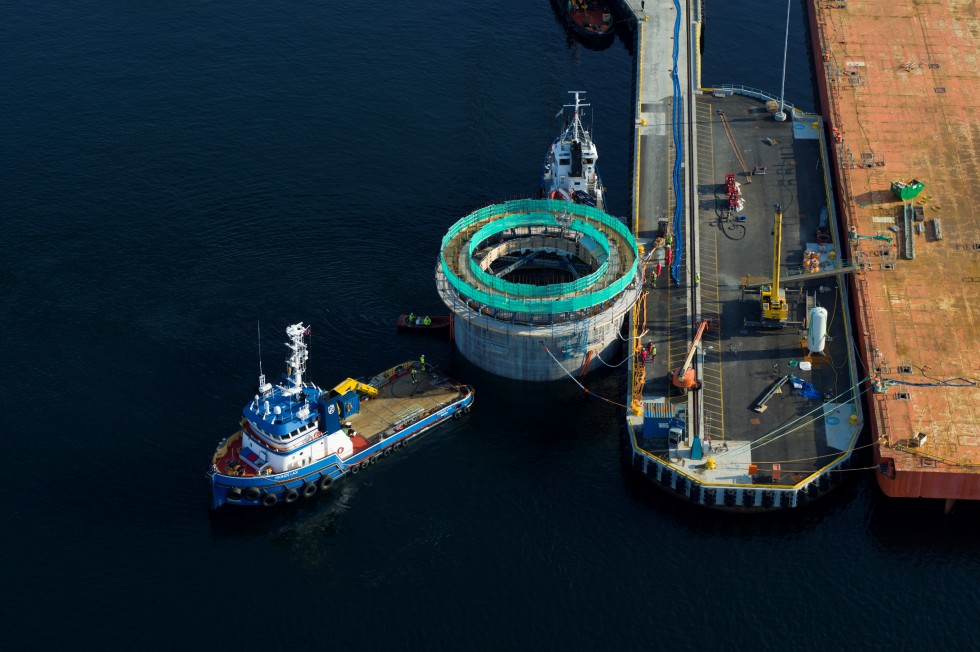 “Hywind Tampen”: departure of one of the floating pedestals to the destination off the Norwegian coast. 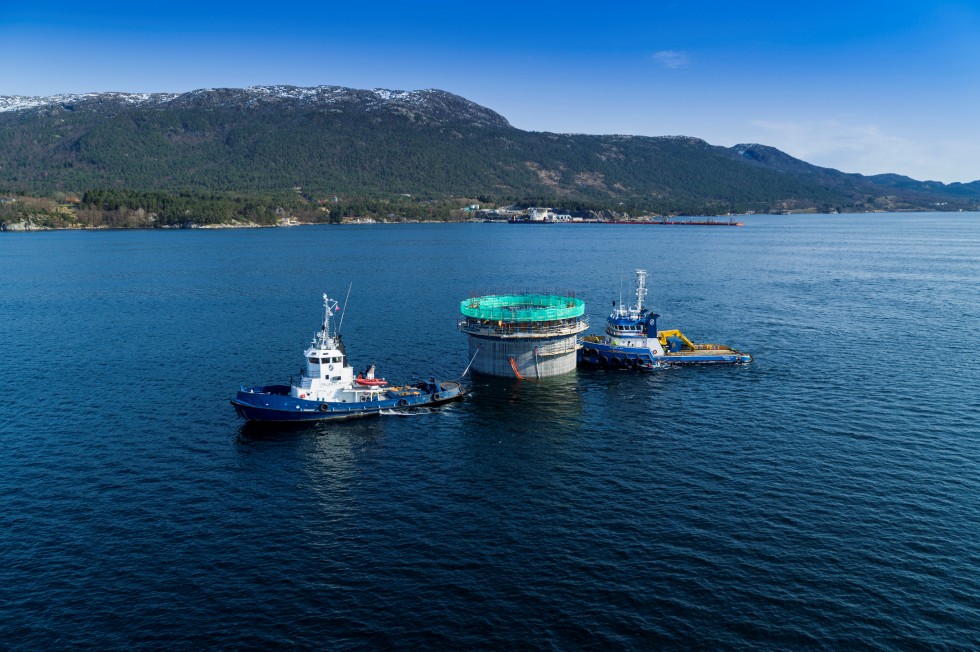 “Hywind Tampen”: floating base on the 140km journey to your destination. 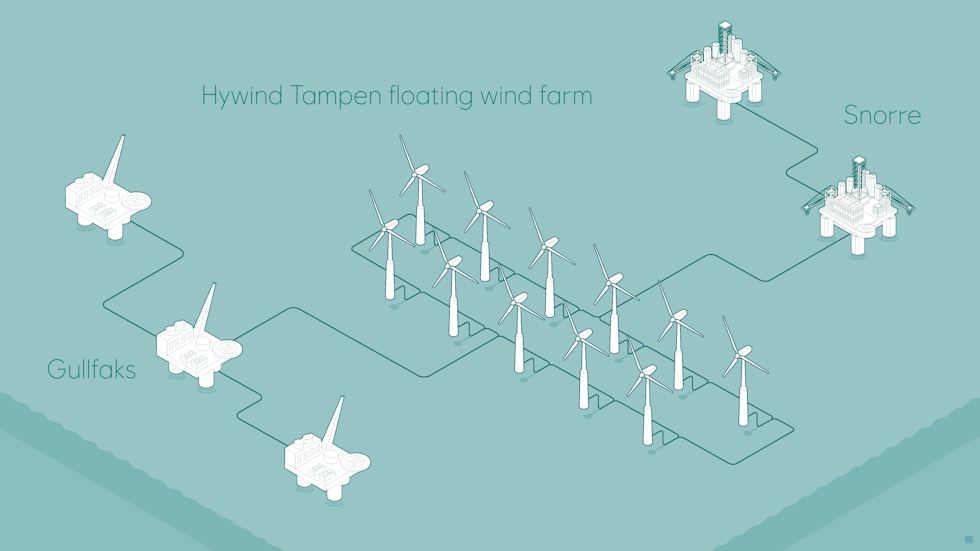 “Hywind Tampen”: This is how the eleven wind generators are connected to oil platforms. Graphics: Equinor 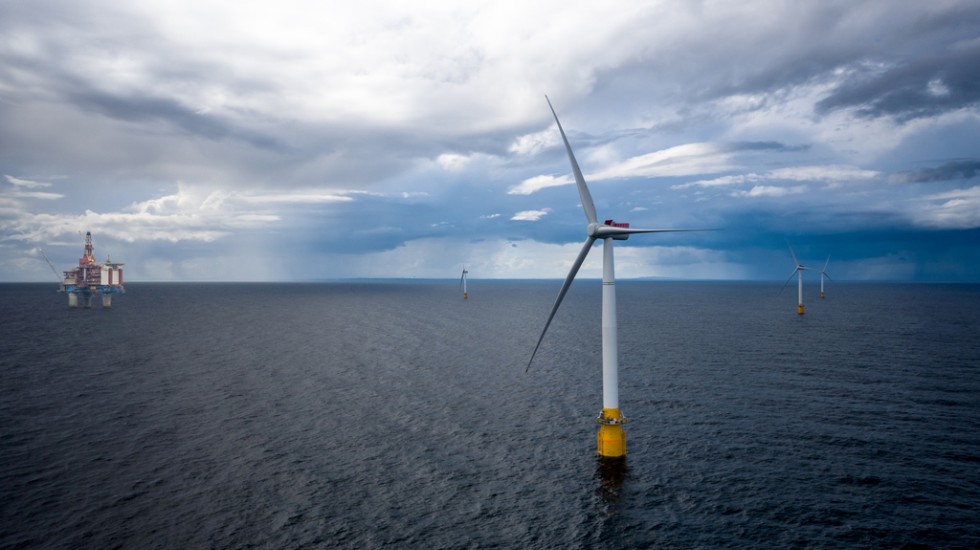 “Hywind Tampen”: On the right the row of wind generators, on the left one of the Gulfak platforms that take the generated electricity.

“In order to continue to operate profitably on the Norwegian shelf, it is important to do our best to reduce CO emissions.2– To further reduce the footprint of our activities, “says Alv Bjørn Solheim, managing director of Wintershall Dea in Norway.” The project fits into our strategy for a sustainable future as an oil and gas producer, “said the investors.