The new “Europa-Park Stadium” with a capacity of 34,700 spectators was designed by HPP Architects for the German Bundesliga club SC Freiburg. Located north of Freiburg, close to the airport and well connected by public transport, it replaces the 1954 “Schwarzwaldstadion”. As it no longer met the requirements of a modern sports facility, it could only continue to be used with a special permit from the will. DFL. When a feasibility study showed that the renovation and expansion of the old football stadium would take around eleven years and cost just under a new building, the decision to build a new stadium was an easy one.

Earthquakes, spectators and their influence on the statics of buildings

Imagine more than 30,000 spectators jumping up and down to the rhythm of a football match. The supporting structure is subjected to dynamic loads and vibrations in the foundation connections. In addition, the planning team has to take into account the fact that Freiburg is located in a seismic zone 2. The requirements for stiffening due to seismic forces had to be taken into account in the design.

Expertise is required for challenging projects like this one. HPP has extensive experience building sports facilities, as did Krebs + Kiefer, who were responsible for the entire structural design and fire planning. The range of expertise was completed by Knippers Helbig for steel construction and design.

In Germany, in most cases, pillar connections for seismic stresses can be dimensioned for all seismic zones (0 to 3) in buildings of importance category I to III with no more than 6 full floors, including the connections of the prefabricated parts, according to Eurocodes 2 to 7 – if necessary in combination with building authority approvals for fasteners and, if necessary, with additional design measures in accordance with Appendix A of Eurocode 8.

The engineering department included Peikko’s screw connections in all precast concrete columns of this challenging facility. The column connections, consisting of HPKM® column shoes and HPM® anchor bolts, serve as cantilever supports in the assembled state and as a reinforcement for normal forces in the final state. 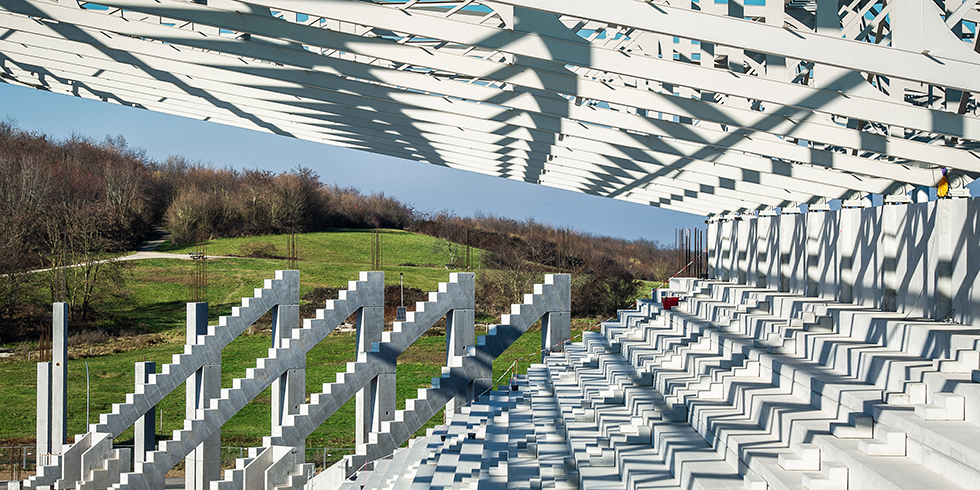 The roof structure is a steel truss structure that slopes inward from the outer wall by approximately 44 m. 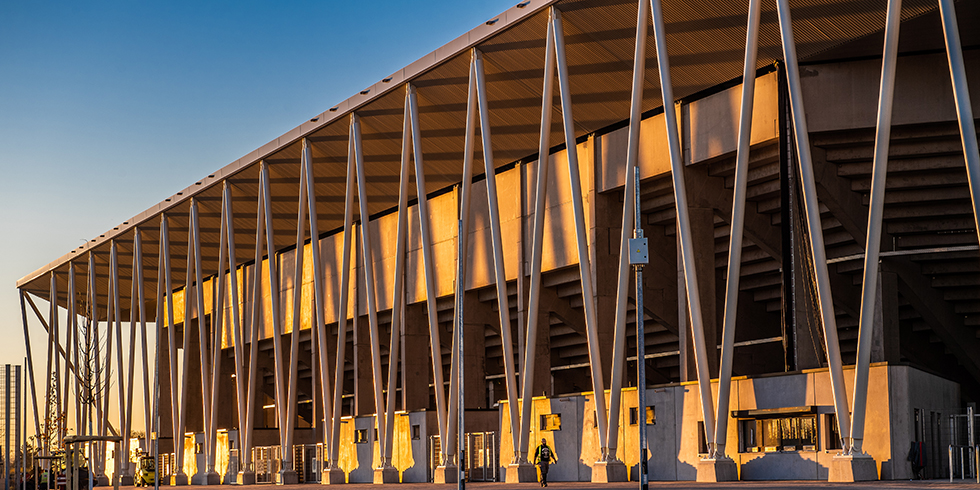 The roof trusses are supported by external inclined steel supports, which transfer the tensile forces to the foundations. 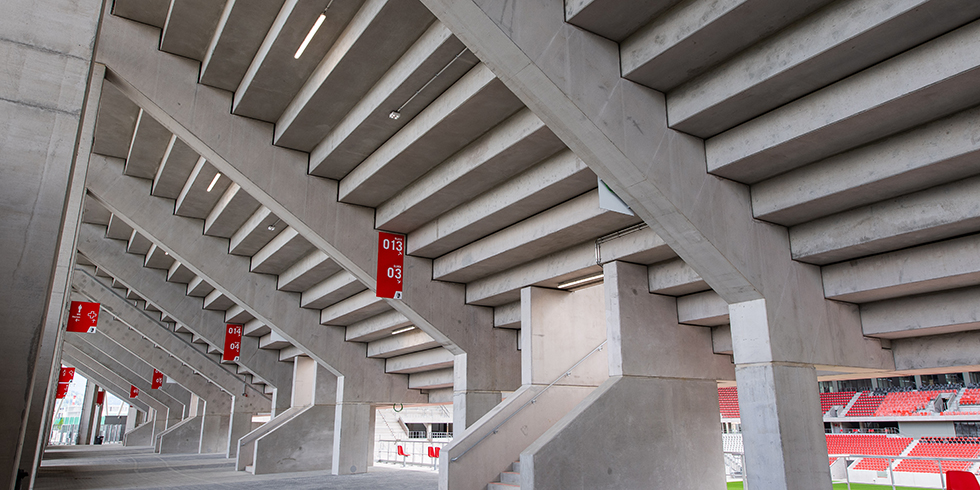 Imagine over 30,000 football fans jumping up and down to the beat. The structure is exposed to dynamic loads and vibrations up to the foundation connections. 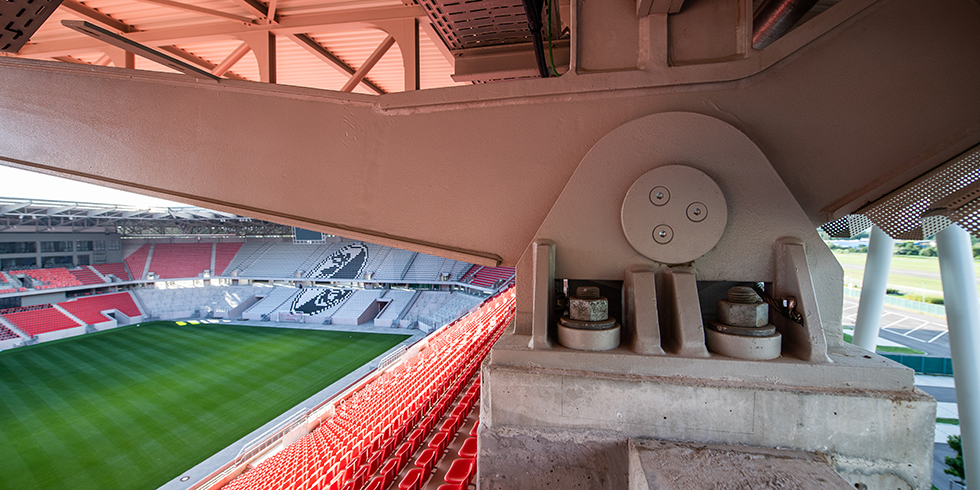 In the support of the roof construction on the precast concrete walls and pillars, galvanized anchor bolts anchor the connections of the steel components in the concrete construction. 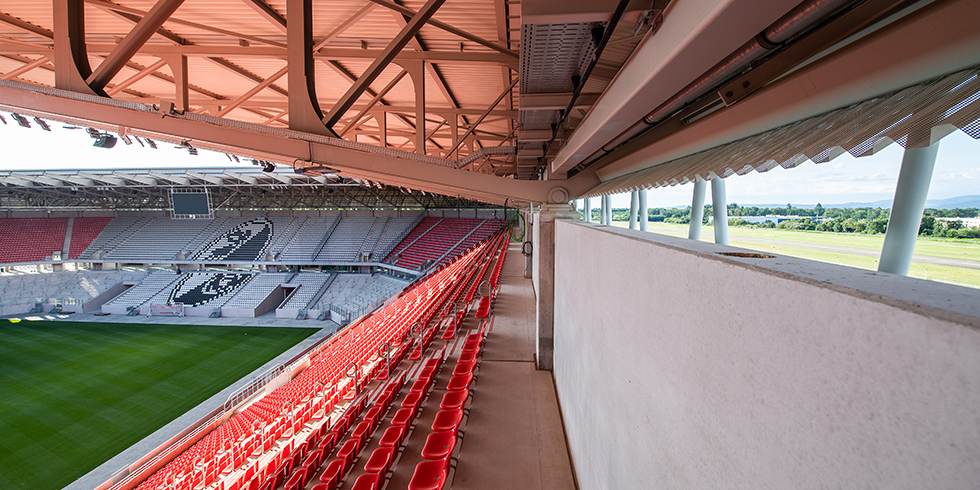 The stands of the stadium without architectural barriers are arranged in a rectangular plan around the playing field. It also houses the club headquarters in 3-level offices, a fan shop, the club museum and service areas for players. The 24,000 m² large free-standing steel construction of the roof covers the entire outdoor area of ​​the viewer and the building.

The roof structure was designed by Knippers helbig as a steel lattice construction projecting approximately 44m inwards from the outer wall. The trusses are supported by external inclined steel columns, which transfer the tensile forces to the foundations. They also form the stadium’s unique and distinctive zigzag facade.

Galvanized anchor bolts were used to anchor the steel component connections to the concrete structure where the roof structure rests on the wall or supports.

“With the screw connections for the precast concrete parts, the shell of a stadium is completed in 12 months,” explains Thorsten Heskamp, ​​engineer at the technical office in Peikko Germany. In this case the construction phase took longer, but in the end SC Freiburg is pleased to finally move into its new home and write a new chapter in its history. 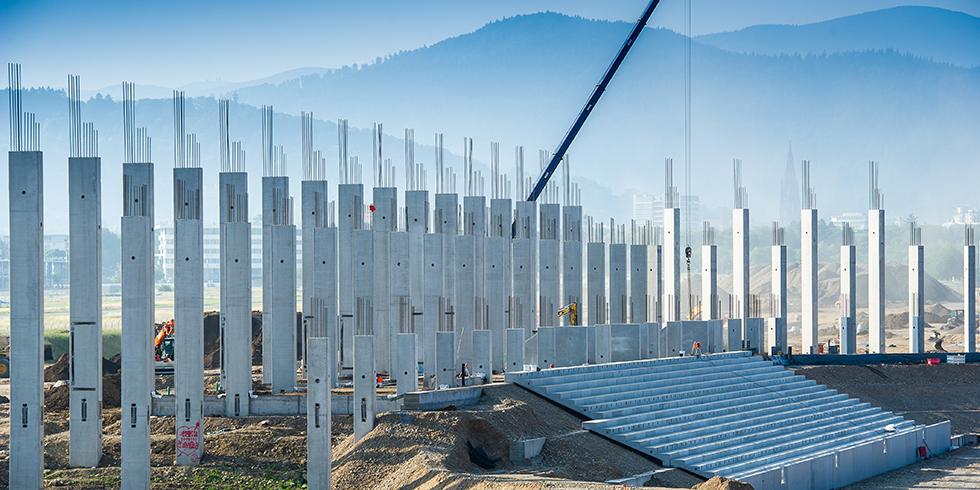 All precast concrete columns of this challenging structure were connected to the foundation with Peikko bolted connections. 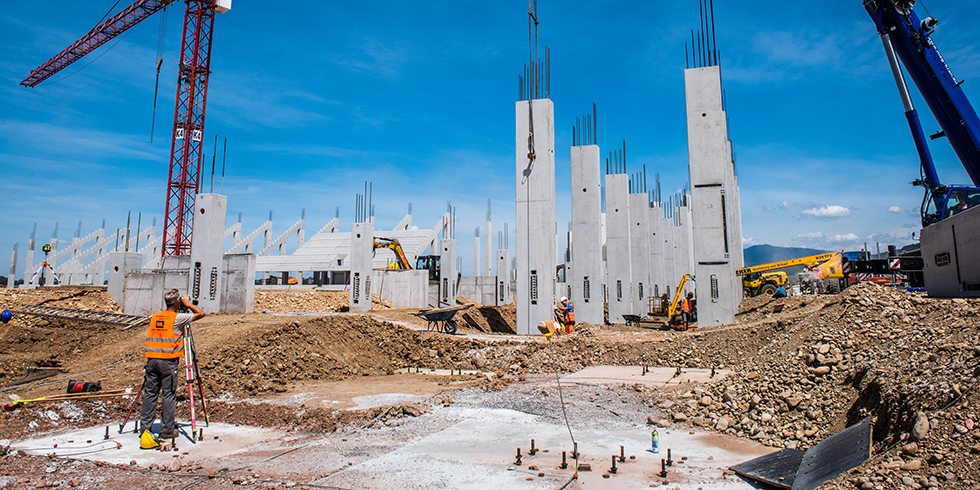 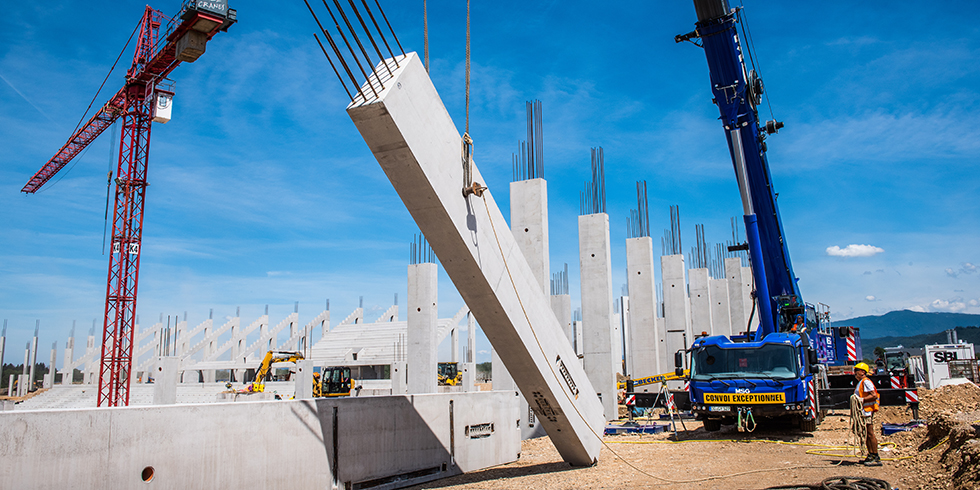 With Peikko column connectors, a prefabricated column can be installed in 10 minutes. 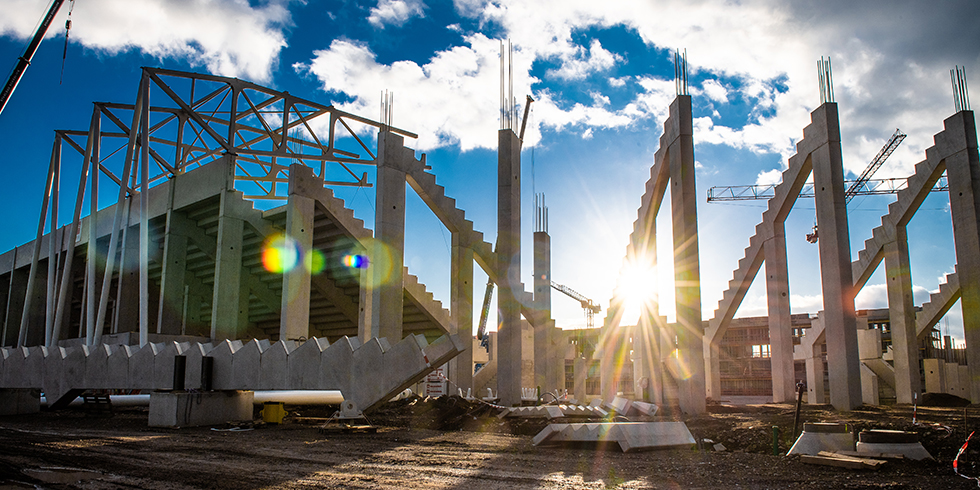 “With bolted connections for precast concrete parts, a stadium enclosure can be completed within 12 months.” 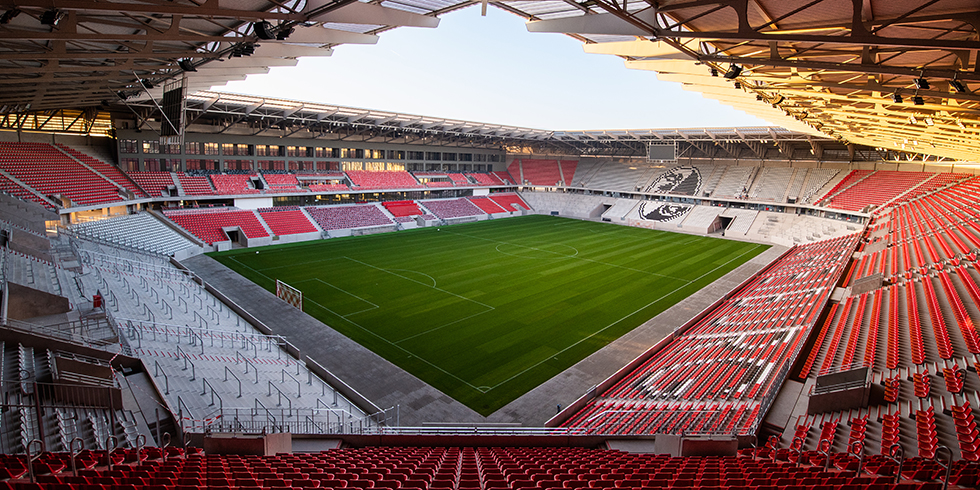 The new “Europa-Park Stadium” with a capacity of 34,700 spectators was designed by HPP Architects for the German Bundesliga club SC Freiburg. 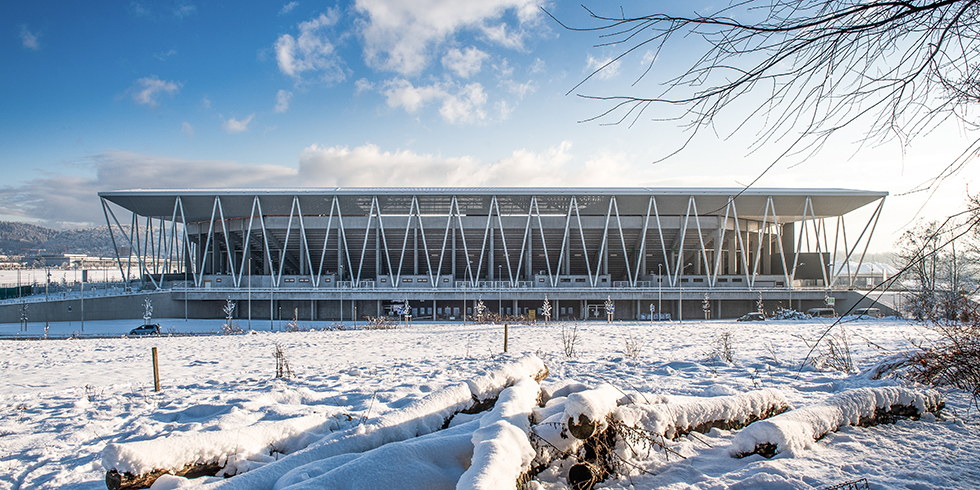 The external steel supports form the striking zigzag facade of the stadium.

The history of SC Freiburg continues in the new stadium

Due to the COVID-19 pandemic, the building was not completed until the end of 2020 and the opening was postponed to October 2021. The friendly with opening ceremony against FC St. Pauli took place on October 7, 2021 in front of 15,000 spectators. On 16 October, the first competitive match against RB Leipzig, runners-up last season, resulted in a draw. Due to the COVID situation, only 20,000 spectators attended the match. Coach Christian Streich thinks it is unlikely the team will need time to get used to the new environment of the Europa-Park stadium. Asked about his experiences in the new arena, he says, “… if you imagine there could be 15,000 more … then that’s great, of course. It’s going to be brutally loud and exciting.”