The US platform is currently facing mass withdrawals after many people, often influencers with tens of thousands of social media followers, said users should withdraw from the platform.

And these retreats are explained for good reason. The catalyst was an “accidental” transfer of 320,000 ETH – or $410 million – to Gate.io, another cryptocurrency exchange, on Oct. 21 before being returned. Crypto.com management says they accidentally sent it to a whitelisted business address (a list of trusted third parties) instead of a cold wallet, which is an offline hosted cryptocurrency wallet. Remember, this is happening against the backdrop of the FTX bankruptcy.

According to Kris Marszalek, CEO of Crypto.com, “It was supposed to be a transfer to a new cold storage address, but it was sent to a whitelisted external swap address. We worked with the Gate.io team and the funds were then returned to our cold store. New processes and features have been implemented to prevent this from happening again.

On the same day Crypto.com’s large Etherscan transfers were revealed, Binance CEO Changpeng Zhao tweeted that “If an exchange needs to move large amounts of cryptocurrencies before or after proving its wallet addresses, that’s a clear sign of trouble. Stay away.”

If an exchange needs to move large amounts of cryptocurrencies before or after proving their wallet addresses, that’s a clear sign of trouble. Stay away. To remain #SAFU. 🙏

The problem is that these revelations are being made in a very fragile context for the crypto ecosystem, especially with the bankruptcy of FTX and dark revelations regarding its former CEO, Sam Bankman-Fried. And what’s more, it’s not the first time that Crypto.com, which, I remind you, is a leading cryptocurrency trading platform with billions of dollars in assets under management, broadcasts “accidentally” millions of dollars to the wrong address. The exchange had mistakenly sent $10.5 million to a user in May 2021, and it took the platform seven months to catch on.

The disappearance of FTX has raised concerns about the safety of users’ investments in cold storage platforms. In this context, many of them have released their “backup evidence”. Put simply, “proof of reserve” (PoR) is the inventory of assets that the platform owns and is intended to provide accountability as well as proof that an entity owns the assets it claims to own at that time. customers. As for Crypto.com, here is the exact detail of the main assets held by the platform on behalf of its clients.

Yes, you are not dreaming. Users would hold more cryptocurrencies SHIB (21.71%), considered an even more speculative cryptocurrency than the others and devoid of intrinsic value, compared to ETH (16.41%). However, such disclosure does not constitute authentic verification of the reservations. The chief executive said he would issue a comprehensive report of his reservations which will have been pre-verified by an independent audit firm. He says it was to be expected “complete and verified proof of reserves by us within the next few weeks, confirming full 1:1 reserve of all customer assets. You can expect Crypto.com to continue to operate with full transparency and remain a safe and secure platform.

Regarding his involvement in FTX, the CEO of Crypto.com wants to be reassuring “We have minimal exposure to FTX (less than $10 million) and have only used it as a trading venue to hedge client trades. We have never committed capital for performance with FTX or any third party”says Kris Marszalek. Statements that will be verifiable “in the next weeks”once the audit has been completed. Finally, let’s not forget that, similar to FTX, Crypto.com has spent astronomical amounts on advertising during the year 2021. a 20-year, $700 million contract for the naming rights to the LA Lakers stadium in Los Angeles, a much criticized commercial broadcast with Matt Damon and an ad during the last Super Bowl. Initiatives that inevitably weighed heavily on the company’s balance sheet.

On Monday, Nov. 14, Marszalek conducted an “Ask Me Anything” interview on Youtube in which he assured the audience that the takedown operations were working. “We will prove people wrong”he has declared. “As a company, we have 1:1 reserves and a very strong balance sheet.” And “We do not lend to third parties, we do not take on counterparty risk”.

In the end, while the $410 million transfer error didn’t have serious repercussions for users, it stands in a bleak scenario where the second largest cryptocurrency platform, FTX, went bankrupt. . Furthermore, as we have seen, it is not the first time that Crypto.com has “accidentally” made transfers of several million dollars, which inevitably deteriorates users’ trust in the American platform. Finally, icing on the cake, Binance CEO Changpeng Zhao, who had already lit the spark for the fall of FTX, comes to warn his 7.6 million Twitter followers to stay away from this type of platform.

It didn’t take long for massive withdrawals to occur on the exchange and Crypto.com’s native cryptocurrency, CRO, dropped 30% in 72 hours. After hitting $0.95 per unit on Nov. 21 a year ago, the CRO is now trading down 93%, around $0.06 per unit. The coming weeks will tell us whether the financial strength of the platform, which has 70 million individual customers according to the company, has been able to withstand the destructive pressure of the market or not. 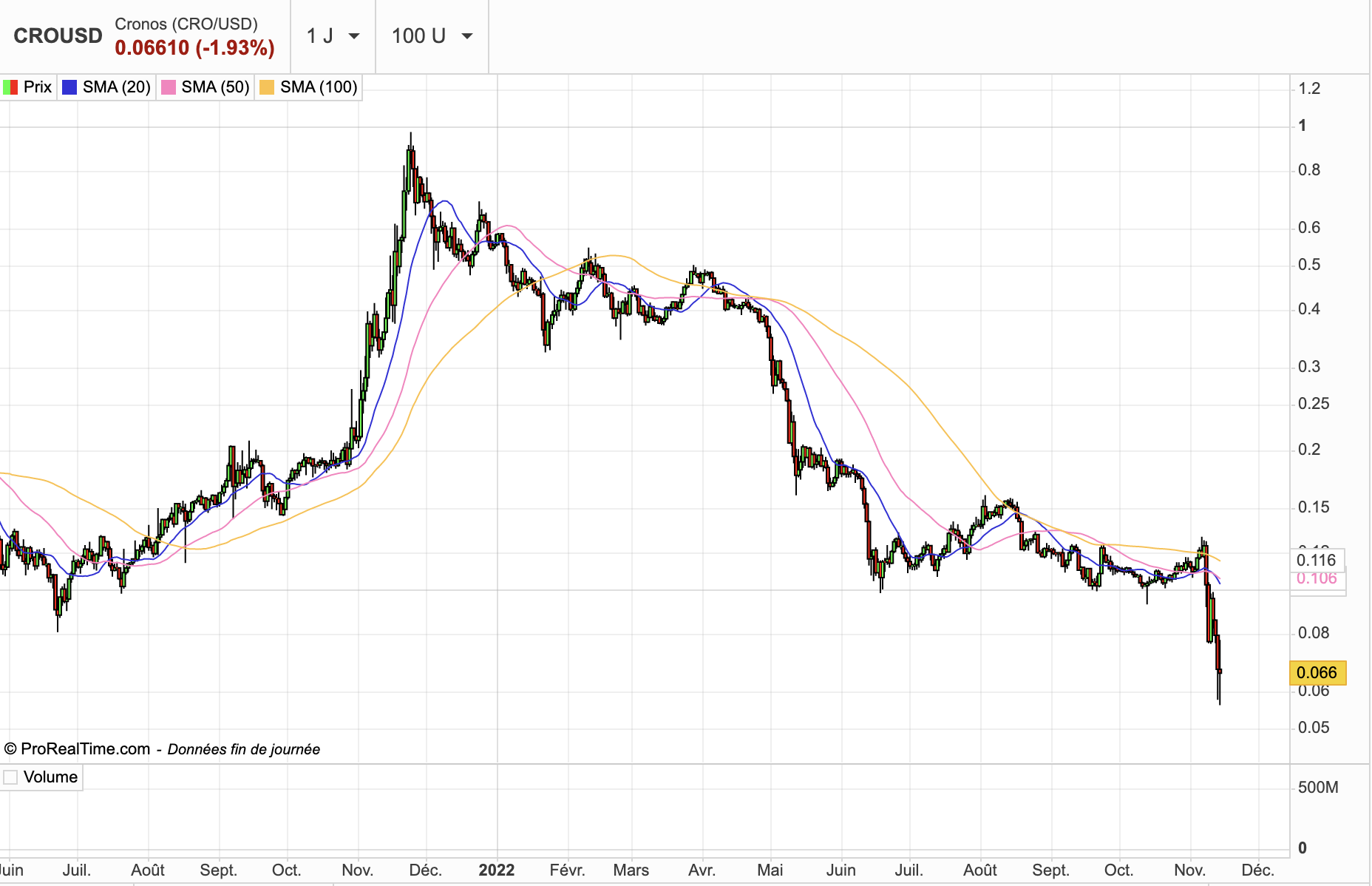